Photo By Ian Hollis
From the BBC
Posted by Canoez at 6:00 AM No comments: 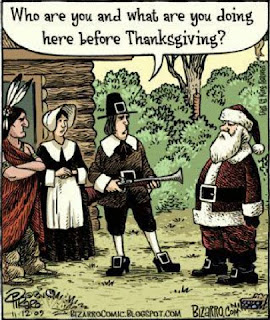 I managed to go until November 19th before I heard my first Christmas music on the radio.   Still, it was a bit too early for me.

I enjoy Christmastime.  Really I do.  I'm not really a misanthrope or a curmudgeon.  However, I do have my limits.  I really, really prefer to celebrate one holiday at a time.

Even more egregious than the music - I went in to a local big-box home improvement store to get something at the end of September - there were both Halloween and Christmas decorations on display.  About a week later, I went in to a local pharmacy - they had displays of Halloween, Thanksgiving AND Christmas decorations on display.  At the same time.  It hadn't even been Columbus Day weekend yet.

I know that economic times are tough and that retailers make a significant amount of their profits on holiday shopping at the end of the year, but it would really be nice if we could just celebrate one holiday at a time.  I usually wait until at least the first week in December before I decorate for Christmas or will even think of putting Christmas music on.  I might do a bit of holiday shopping before the 1st of December, but only if I find something special or unique - and I certainly don't go out on "Black Friday" or "Grey Thursday" as they're now calling Thanksgiving Day shopping.  The commercialization of the holidays - and particularly Christmas -  is getting out of hand.

Let's remember the true meaning of the season and all of the holidays that everyone celebrates at this time of year.
Posted by Canoez at 9:54 AM 2 comments: 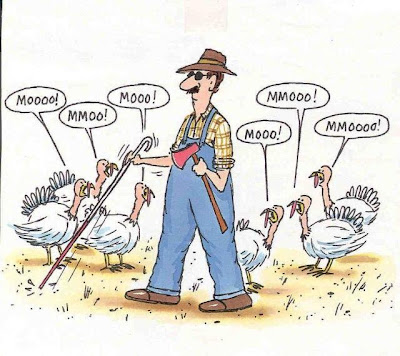 Making the skin-on-frame kayak with my friend earlier, we had no issues with our build.  The thing you need to keep in mind is that we're both experienced woodworkers.  Many of my students in my class or new to woodworking or are coming back to it after a long time.

Sometimes, there are difficulties.

The major one that we've had so far? 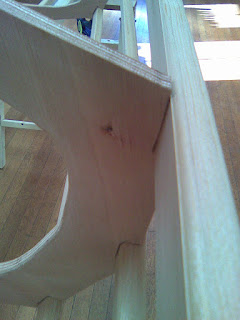 What you're looking at is a hole that's been drilled through the sheer stringer on the right and into the frame at an angle.   This hole will be fore a screw that will be used to help hold the stringer to the frame while the thickened epoxy adhesive in the joint cures.  Drilling at an angle has resulted in a break-out in the frame.  This isn't a disaster and can be easily repaired.  The bigger issue is drilling edge-on into a piece of 1/2" plywood with a small drill bit and keeping centered in the plywood.  Not everyone's eye or hand is quite as steady as it needs to be - practice helps, but we can avoid this issue.

The small jig below is the solution.  It's a drilling guide made from some scrap oak.  The portion that is in my hand would get clamped to the frame.  The other section has a series of holes (Some steel drill bushings from McMaster-Carr or the like would have been a bit better to put where the holes were, but this is adequate.)  and goes in front of the stringer.  These holes are placed so that they will locate drilled holes centrally in the plywood.  Note the notch in the piece that gets clamped to the plywood frame to clear the stringers.  Once installed, you drill through the appropriate hole.

Easy and quick to re-position and use. 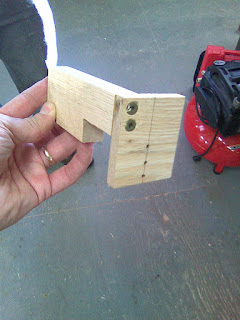 We're starting to tick along now and frames are going together quickly! 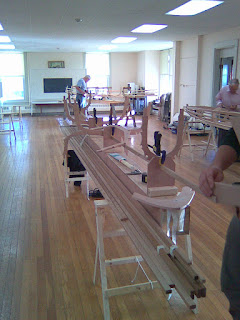 Not Quite Wordless Wednesday. 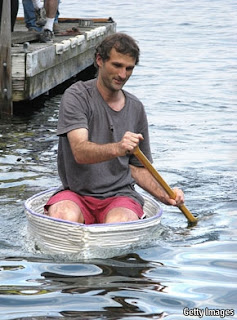 EVERY summer, Seattle holds a raft race in Green Lake, a park that is the eponymous home of the water the rafts must cross. Entries for the Milk Carton Derby have to be made from old plastic milk bottles. The result is a wonderfully Heath-Robinson collection of improvised craft. But this year one stood out: the entry from the University of Washington’s engineering department actually looked like a boat. The students who built it, Matthew Rogge, Bethany Weeks and Brandon Bowman, had shredded and melted their bottles, and then used a 3D printer to print themselves a plastic vessel.
No doubt the Milk-Carton-Derby rules will be tightened next year—though in the end, the team came only second. But they did come first in a competition that mattered more. On October 19th they won $100,000 in the 3D4D Challenge, organised by a charity called techfortrade.

3D printing is all the rage at the moment. Several varieties of the technique exist, using a wide range of materials as the “ink”. One of the most popular methods, though—and the one used by the team—works by extruding a filament of molten plastic. In the case of the team’s printer, this plastic was high-density polyethylene from milk bottles. The print head makes repeated passes over the thing being printed, leaving a plastic trail as it does so. It thus builds up a three-dimensional structure.
3D printing is now taken seriously by manufacturers as an alternative to cutting, bending, pressing and moulding things. It is also a popular hobby among those of a geeky disposition. What it has not been used for so far is to help people in poor countries improve their everyday lives.

Mr Rogge, Ms Weeks and Mr Bowman intend to employ their prize money to do precisely that. They plan to form a firm that will, in partnership with a charity called Water for Humans, custom-build composting toilets and rainwater collectors. The partnership will look for suitable local entrepreneurs in poor countries and will train them how to build, use and maintain the printers.

Once the technology is established for toilets and water collectors, other products will be introduced. The local partners will know what products are needed and how much people are prepared to pay for them—and therefore what is worth making. The operation will thus run on a commercial basis. But the software that controls the printers will be open-source and available to all, as will many of the designs for things the printers can make. That way, the technology can spread. A trial will begin soon in Oaxaca, Mexico.

The crucial point about the team’s printer is that it combines size and cheapness. Printers used by hobbyists are not expensive, but they are small. Many would find it hard to make anything larger than a coffee cup. Those used by engineering companies cost serious money—and even they might balk at printing an object the size of the Milk Carton Derby boat.

The team’s printer is built around a second-hand computer-controlled plasma cutter (a device used for carving up sheets of metal). This directs the movement of an extruder that melts flakes of plastic into a thin stream which can be squirted out as required. It is able to create things with dimensions of up to 2.5 metres by 1.2 metres by 1 metre. Appropriately, many of its parts were themselves manufactured on a desktop 3D printer.

The ink is cheap, too. High-density polyethylene is as common as muck—literally, for a lot of it ends up on refuse tips. Chop it up, though, and it is grist to the mill. Mr Rogge estimates that if he and his colleagues had printed their boat from commercial plastic filament it would have cost them $800. Instead, 250 clean, empty milk bottles set them back just $3.20.

Some technical questions remain. High-density polyethylene shrinks when it cools. That stresses the object being printed and can sometimes tear it apart. The students are therefore working on a second prototype that prints things faster, allowing the layers of plastic to cool almost simultaneously. They are also experimenting with making things from other types of waste plastic that suffer less from shrinkage. And until a production version of the printer is ready and priced, it remains to be seen how competitive its output really will be with mass-produced items. Mr Rogge doubts, for example, that a 3D-printed bucket—even one made from milk bottles—will ever be cheaper than one made in a factory.

Boats, though, could be a hit. One of the judges at the 3D4D Challenge noted that many small vessels in West Africa are made from trees, such as teak, that are becoming scarce. Making them from waste plastic instead would be an environmental twofer: rare species would be conserved and less rubbish thrown away.

Posted by Canoez at 9:53 PM No comments:

It's just not possible...

...to leave  yesterday's post "wordless".  There's just too much to tell about it.  One of my students took a trip to South America recently and went to Rapa Nui and Chile all the way down to Patagonia and Tiera del Fuego.  While there, she took the picture from yesterday's Wordless Wednesday post.  I believe it was built by the Yaghan people of Tiera del Fuego.

The outer part of the hull of the boat is made from bark that has some stringers inside the boat and lashed at the gunwales with sinew.  There were also some thin pieces of wood sprung in the middle of the boat like ribs.

As I understand it, the whole family would go out in the boat.  The wife would be paddling in the back of the boat (Note the two paddles in the picture, laid across the thwarts on either side.)  while the husband was at the front with either a spear (Several are between the paddles...) or a bow and arrows looking for food in the water or on the land.  In the middle of the boat would be the kids - and a fire.  The fire would be made on dirt that was piled on the floor of the boat for cooking. 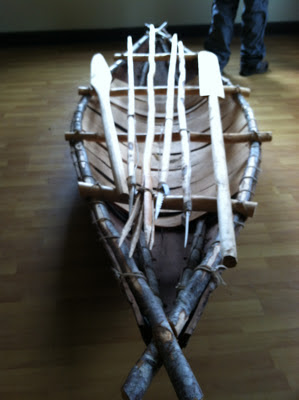 Photo by Elizabeth Adams
Posted by Canoez at 6:00 AM No comments:

Every single one counts! 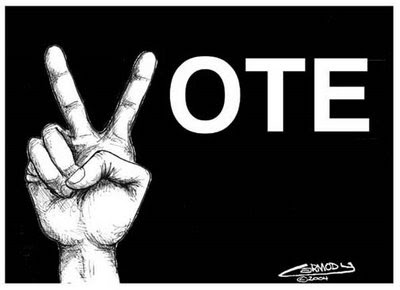 Preparation is half of boat building.   The students in my class have been working diligently preparing materials to assemble into skin-on-frame boats.  We started with a half sheet of marine grade plywood and some western red cedar and pine lumber. Using a set of master patterns  (the light colored parts on the table), they traced the outlines of the shapes onto the ply. 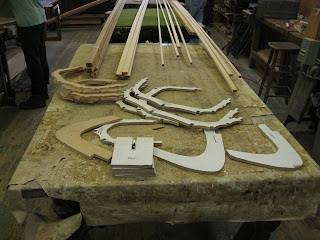 Then,  they rough cut the outlines using jigsaws and bandsaws and cut the notches for the stringers. 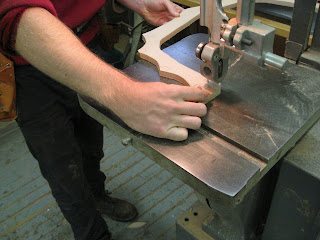 Once the outlines were rough cut, we used carpet tape to bond the master patterns to the rough cut frame.  We then used a pattern bit in the router table to make the pieces that the students were making exactly the same as the patterns. 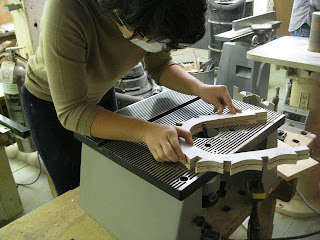 After the frames have been cut, a finish fit is made for the stringers with a fine rasp. 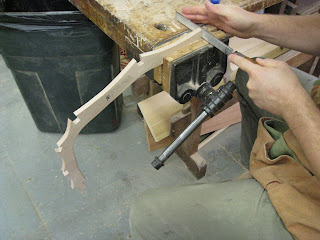 Once the notches have been fitted, a test piece should fit smoothly into the notches. 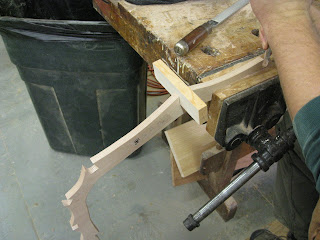 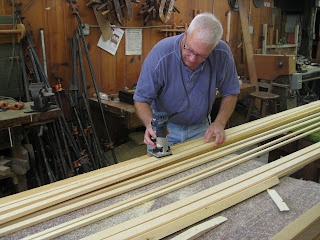 Finally, we've assembled the strongbacks to build the boats on.  (Note the sawhorses from the previous posts.)  We've built a few new strongbacks, will try to re-use some old ones and 2x4's that are recommended for this build method. 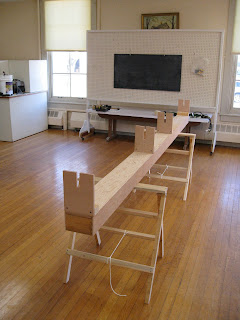 Frames go together quickly once the material is prepped.  I expect to be able to show some mostly finished frames after next week's class.

Posted by Canoez at 9:46 PM No comments: