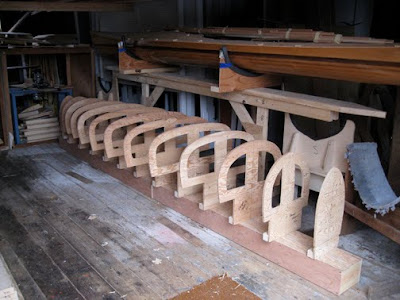 The picture above is of the new "lightweight" box-beam strongback and the "light" patterns. For those of you who may not have been following this blog, this design is a Prospector Ranger 15 from Bear Mountain Boats. At 15' long and 35" wide, it is easily the largest canoe that we've ever built at the school where I teach.

We had several concerns with building a boat this large. It was going to be a) big and b) heavy. First, as the boat itself is 35" wide and the main engtry door we go in and out is 36", but the swing of the door prevents us from getting a full width opening. To solve that issue, we move this boat out through the door on it's side as it is only 28" from the bottom of the box beam to the keel of the patterns. Even doing this required shortening the station forms by about 4" and notching the stem and stern forms to lower the whole set of forms.

After you get the canoe through the door, you need to make a 90° turn to go through some (thankfully!) larger doors and down a flight of stairs to get to the basement shop. Once down the stairs, you need to turn again to get the boat in place to work on it. The shop is well equipped, but a bit tight for building 6 canoes at a time. I tell my students that it is a bit like ballet - everybody needs to be in the right place at the right time and know what all the other people are doing!

The station forms are also hollowed out. As I mentioned in an earlier post, this was to reduce weight. The weight loss from the station forms alone was 14.5#. I really need to weigh the whole assembly, but when we brought out a Wee Lassie strongback with station forms on it this morning, we put it down and then immediately lifted the "lightened" strongback and station forms of the Ranger. We found them to be comparable weight-wise.

While the bits of material that we've left look deceptively thin, they're at least 3" wide along the edges and 4" wide at the center. I was concerned about warping of these station forms and that has not reared its ugly head, so I'm pleased with that. Overall, a real "thumbs-up" for our new space-age design.
Posted by Canoez at 7:51 PM