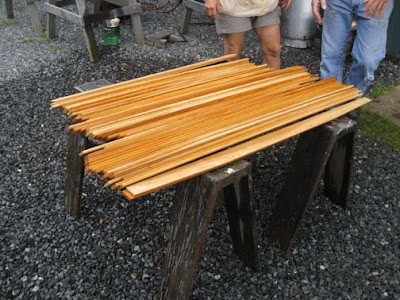 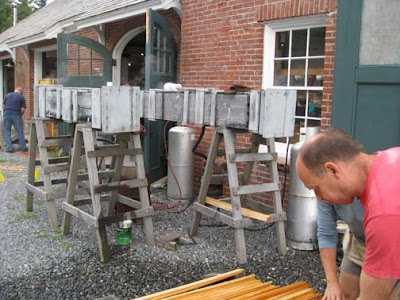 The steam boxes weren't fancy affairs. As you can see, there are some large propane tanks which feed big burners like are used for a crab boil. A closed top container (loosely closed) is kept fairly full of water. A radiator hose feeds steam to the wooden box which has a rack to keep the ribs off the bottom and a well fitting end cap. The ribs then steamed for 45 minutes.

When the ribs were removed from the steam box (one at a time, starting amidships) they were taken over to the mold and immediately slipped under the rib clamp (the long 2-by at the keel) bent and tacked to the inwale with bronze ring shank nails. The taper of the ribs was kept towards the middle of the canoe and the straight edge of the ribs was aligned with the edge of the steel bands to keep the spacing correct. It took less than an hour to bend all of the ribs on the 16' canoe. We broke one rib at the end where the bend is fairly tight. At the stems, the ribs are held to the stem using bronze ring shank nails that are driven into pre-drilled holes to avoid splitting both the ribs and the stems.

Here are fellow students bending ribs on their canoe: 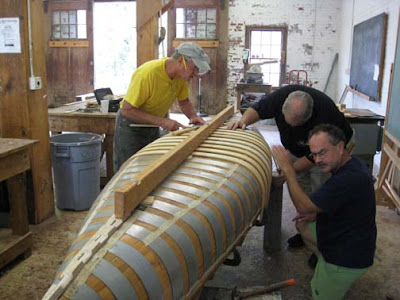 When all the ribs were in place, the canoe looked like this: 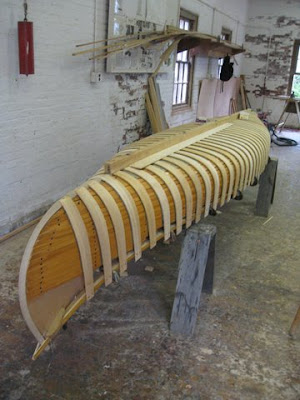 The clamp at the keel is very apparent in the picture above. It is also used to see that the ribs are aligned side-to-side.

I don't know exactly what it was, but I had an awful hankering for a rack of slow cooked baby-back ribs with a smoky-sweet barbecue sauce...

Once the ribs were on the boat, we proceeded to get thwarts, grab handles and a yoke out of some four-quarter Mahogany. It was marked with templates, cut and faired with spokeshaves, rounded over with a radius bit in a router table and then further worked to get an oval cross-section with spokeshaves. A taper was cut on either end of these parts to mate to the angle on the underside of the inwales as well. 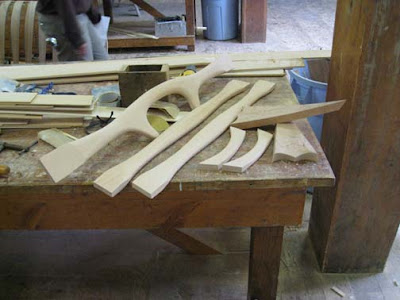 Decks were cut from a steam-bent and pressed blank of cherry, the edges beveled to match the inwales and the back was thinned with a gouge to make it a bit thinner in appearance. There is a fair amount of thinning and tapering parts to reduce weight and to gain a more elegant appearance of the finished product. Here's the back side of the deck: 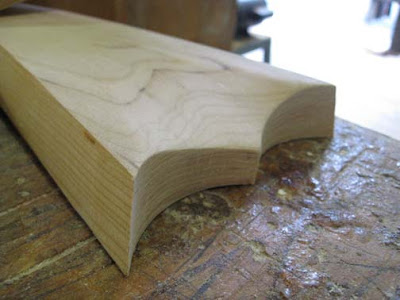 While we were completing these parts, the ribs had dried out enough that we could use some fairing blocks (basically short longboards - is that redundant?) that were coated with coarse sandpaper - 40 grit if I remember correctly - to fair the ribs. Before we faired the ribs though, we used a piece of planking to look for unfair ribs - those that were a bit low or too high. The ribs that were too low were shimmed up using thin wedge-shaped leftover scraps from tapering the ribs. One rib was actually a bit thicker than the rest and we took it down with a spokeshave.

To fair the ribs, we first run the fairing block across the ribs until the scratches run all the way across. Then we sand from the keel down. Special attention was paid to the ribs at the stems to assure that they didn't stick up above the stems.

Once this was done, the ribs were ready for planking and we were done for the day.
Posted by Canoez at 9:02 PM