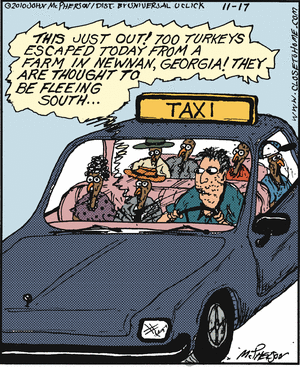 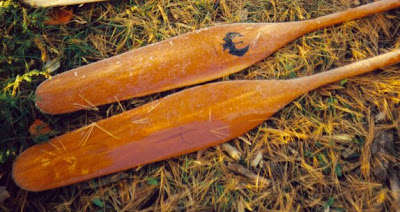 A little cleaning is good for the soul... 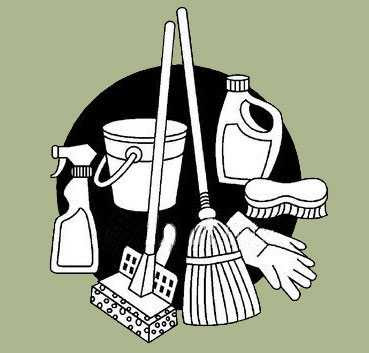 When I was first approached about teaching my canoe-building class, I was told that we would be able to use the barn in the school's parking lot. I was under the impression that we would actually be building the boats in the barn at first. When I was finally given a key to the barn to clean up some space in the barn, I discovered that the place was pretty packed. We managed to clean up some space - about 1/2 of the first floor. The administrator then let me know that I'd only be storing the boats in the barn, but building them in the shop.

The barn in which we store our boats in received a very thorough cleaning this weekend. Before we started, we could not physically get to the second floor of the barn to do the cleaning because it was so jam-packed. Along with 6 boats and and boat-building equipment, there was lots of old equipment that had come out of the school building when it had been renovated in the past.

The building was probably built in the 1880's along with the house that originally (but not longer stands there...) stood in front of it. To be honest, I think some of the things that we cleaned out of the barn have been there since the 1920's or even earlier. We even discovered things about the barn that we didn't even know - such as that the barn had a full basement with a set of access stairs in the floor.

Now there will be plenty of space to move around in the barn!

Cleansing is good for the soul!
Posted by Canoez at 9:33 PM 3 comments:

A diversion from boatbuilding...

DS and a couple of his buddies were interested in being Cub Scouts and I managed to get myself roped in to being a Den Leader. I guess it must be fate.

As part of one of their requirements for the Bear badge, they had to build something useful out of wood. We discussed a few options for things that they could make out of wood. These included the usual suspects of a shelf, birdhouses and the like. From the list of presented options they decided that they would like to build some journeyman style toolboxes.

Fortunately, I have a friend who is a tree farmer and a sawyer who had sold me some nice Eastern White Pine which I had in the cellar. The pine had been in the basement for a number of years waiting for an appropriate use and I figured that the time had come. Based on a design that I'd seen, I sat down at my work computer at lunch-time and designed a tool box in the CAD system. I then made a prototype from the drawing which was nice. I bought some screws and a few oak dowels and cut enough parts for the 6 boys in the Den to make their own toolboxes. Quite frankly it was a labor of love as there were lots of parts.

Last Wednesday night we had our Den meeting where the boys and their parents worked as a team to put together these toolboxes. They got to clamp together the assemblies, drill the holes for the screws that went into the boxes and screw them together. I brought along a small compressor and pneumatic stapler which they used to assemble the drawers with a little help. I think they had a good time building the tool boxes and that Santa Claus may hear some requests for pneumatic staple guns over the next month or so....

Here are the results of DS's work: 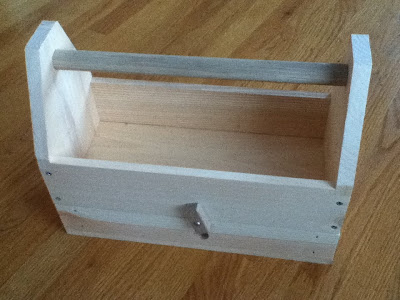 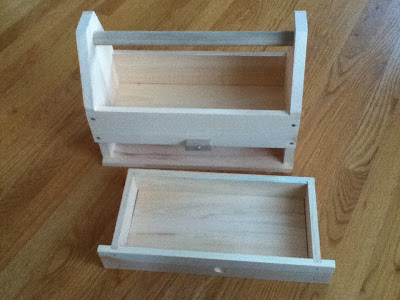 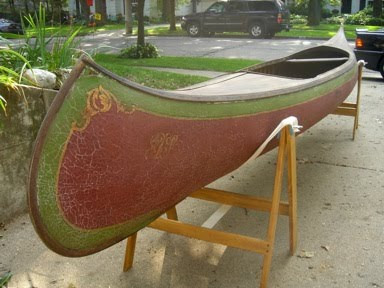 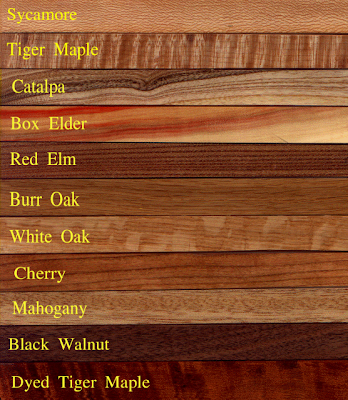 Well, according to Robert Heinlein, TANSTAAFL.

For the rest of us, that means, "There ain't no such thing as a free lunch."

Well almost. There is a wonderful place that is paid for by the US taxpayer. It is a division of the Forestry Service under the auspices of the Department of Agriculture called the Forest Products Laboratory. They say about themselves:

Our mission: To identify and conduct innovative wood and fiber utilization research that contributes to conservation and productivity of the forest resource, thereby sustaining forests, the economy, and quality of life.

Which really doesn't do the variety of research that they do justice - or the services that they provide doing wood identification. One of the marvelous things they publish which almost any woodworker would find useful is their Wood Handbook. This document is available as a free download. However, this isn't to say that the information is limited to the engineering properties of wood - if you can think of anything to do with wood, they've probably done research on the subject. They provide an amazing amount of information and have been doing it now for one hundred years.

Labels: Devil in the details 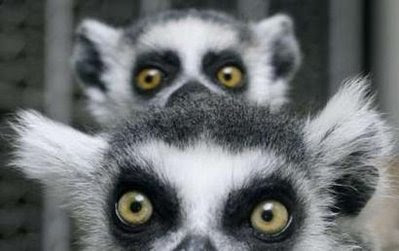 As I was having lunch today, I was reflecting on the router table that I designed to mold the cove and bead features on the strips we use to build canoes. It struck me that it is about time to get serious about designing an improved version.

I've also got some improvements that I'd like to make to the strip-cutting operation and some new jigs and fixtures for other little things that we do when we build canoes.

Well, having students looking over your shoulder and looking for better ways of doing things certainly is one reason. People have many different experiences in life and one of the things that makes everyone's life a bit richer is to share those experiences. In the shop it takes the form of, "Well, I used to do this:", or "How come we can't try it this way?"

This is why I like to have people looking over my shoulder as I teach things. I hear the different questions and different points of view - and that is wonderful.
Posted by Canoez at 8:31 PM 6 comments: 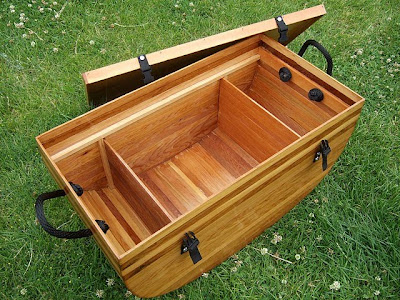 A Happy Day for Cat

A hearty congratulations goes out to Catherine. Cat has been a reader of this blog for a while and has just finished and launched her (second?) hand-built canoe - a Wee Lassie II:

The canoe is named Constance and is a slightly stretched version of Mac's design. As you can see from the pictures, Cat did a beautiful job of building and finishing Constance and should be justifiably proud of her new canoe.

However, launch day for many builders is both a bit nerve-wracking ("Oh no! I might scratch my new boat!") and leaves them feeling a little bit lost. ("Ok, I'm really done building my canoe? Now what?") I've noticed that there are paddlers and there are boat-builders and there are those who are both.

When working with two of my current students outside of class, I happened to meet a man who had tried to sign up for my class last year. Unfortunately, the class was full. He decided that he couldn't wait another year and ordered a kit from Newfound Woodworks for a Wee Lassie. He has since completed the kit and has spent some time paddling, but would like to build another boat. While he said that he liked to paddle, he admitted that he's one of those people who feels like more of a boat-builder than a paddler. I think we'll find that he builds more boats in the future.

One of my students who completed his boat last Spring enjoyed the class, but I think will probably not build another canoe. He was a paddler before he started the class and when his wife signed him up to take the class, I think for him it was a means to an end - paddling a home-made canoe. He's been having fun paddling his canoe and will probably continue to enjoy it for a long time to come.

Cat is one of those people who seems to fall into both categories. She appears to enjoy her paddling and her boat-building. Can't you tell?