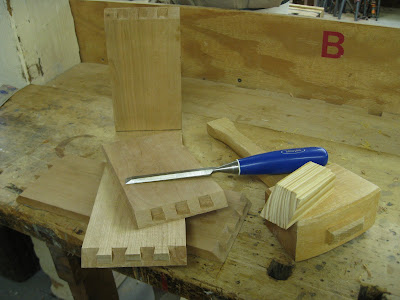 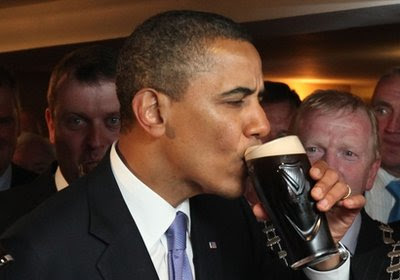 Barack O'Bama hoisting a pint of Guinness Stout - AP photo.
Apparently he found the apostrophe he was looking for on his trip to Ireland. I hope this isn't a statement on the quality of what he's been brewing at the White House. Full post from the Obama Foodorama blog maintained by Eddie Gehman Kohan.
Posted by Canoez at 8:27 PM No comments: 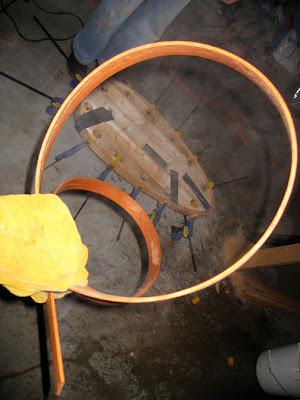 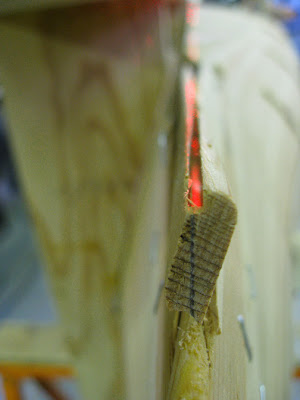 So, this is a continuation of a previous Tech Tip Tuesday. My student who is building the Wee Lassie II which has been dubbed Wavy Gravy for its sinuous feature strip finished up the second bottom panel at the last class session and set up the jig to cut the panel with a circular saw as he had the first side. Before he made the cut, he set up his laser (above) to see where the cut was going to lie - right in the previous kerf at both ends.

When the cut was made, he erred on the side of caution and cut a kerf width wide. While this wasn't a bad idea, the panels wouldn't fit with this extra material. When the bottom panels are fitted, they need to lay on the forms without "springback". In other words, when you push on the bottom panels where the forms are, it should feel solid, the panel shouldn't flex and spring back up. These are key indications that the panel doesn't fit yet. If there is springback, it is likely that the hull will crack when fairing or sanding the hull. This is a bad situation to be in and we want to avoid it by properly fitted panels.

To make the panels fit, he took a plane to remove material from the second panel. (The first panel was cut exactly to size.) This material is most easily removed when the panel is off the hull forms. While the panel will flatten out slightly, he had cut the panel on the hull, so the bevel angle would vary down the panel length and he could use that bevel as a guide to plane the material away. Quite frankly, I think he did a good job - the hull was tight with the exception of the last 12-14" on one end - it was open a bit at the bottom and will need a either need a little bit of Dookie Shmutz filler or a sliver of cedar to fill the gap.

We also needed to apply a clamp and v-block to hold the panel ends at the proper angle to bond well. 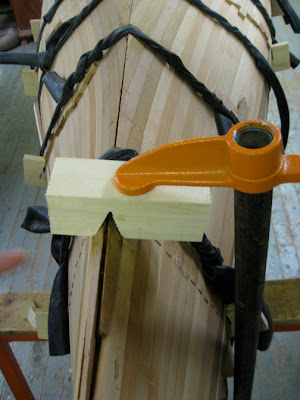 It was also trussed up like a Thanksgiving turkey with inner tubes while the bottom set up. 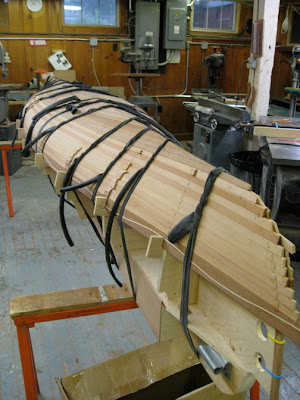 The results look good so far. Next week, the clamp blocks that are holding the feature strip in place (he didn't want fasteners through the feature strip) will be removed and he will strip up to the sheer line.
Posted by Canoez at 9:22 PM No comments: 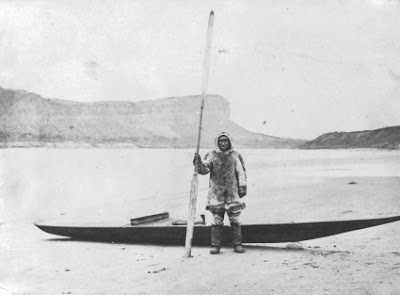 Posted by Canoez at 9:38 PM No comments: 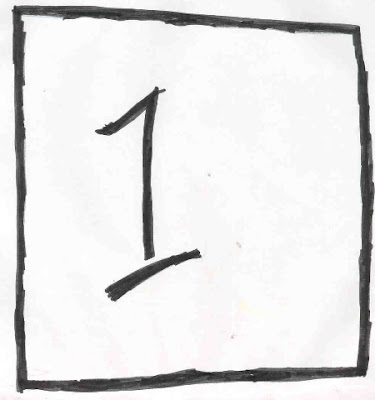 That's square 1 up there and we're back there again.

Last Thursday evening, my friend and I who are building SOF kayaks were steam bending some Mahogany for coamings and hatches on her kayak. Unfortunately, we were working with a variety of Mahogany (probably Phillippine...) that wasn't suitable for the task. The wood was selected because it was a) nearly free... and b) light weight.

The wood was well cut in terms of grain direction, the wood was wetted down before we steamed it and the wood was heated to an appropriate temperature for a good length of time. A piece of cherry that was put in the steam box to act as a spacer bent like a pretzel.

Whoops. Let's try another one.

We did manage to steam bend some strips of "true" Mahogany for coamings on one of my student's canoes with no issues. With this information in hand, the only choice we had was to simply go back to square one and start over. So, my friend went and bought a piece of African Mahogany to use for the next strips we'll steam bend. The irony of the whole thing was that the piece of stock probably cost nearly a third of the cost of the rest of the kayak to date!

As I've said before, and I'll say again, determination is necessary to built a boat.
Posted by Canoez at 9:46 PM 3 comments: 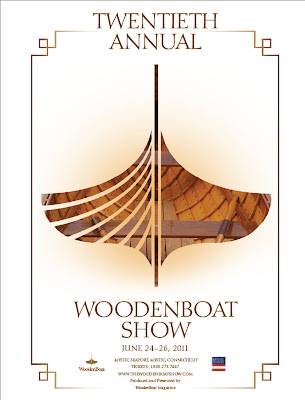 ...until the 20th annual WoodenBoat Show at Mystic Seaport in Mystic, Connecticut. Lots of great things to see and do. If you've got an interest in boats - particularly wooden ones, you owe it to yourself to go. Be sure to check the link above for information on events, exhibitors, family boatbuilding activities and the tribute dinner honoring Lance Lee this year.

This year, however, there will be a bit of a twist. For the first time, the John Gardner Small Craft Workshop will be happening at the Seaport on the same weekend. The Workshop is intended to get people interested in small traditional paddle, rowing and sail and oar boats. As part of this goal, there are boats that are available for the public to try. I think this will be a wonderful combination!
Posted by Canoez at 10:50 PM No comments: 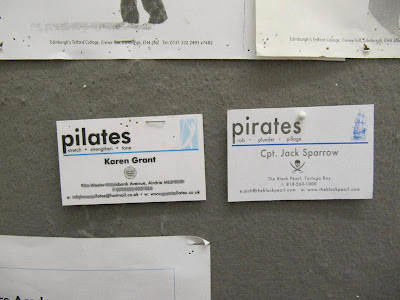 Posted by Canoez at 8:41 PM No comments: 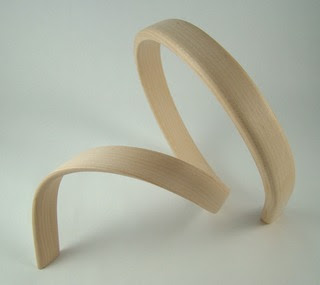 (Photo by Inventables)
DW sent me an email message with a link that seemed to be eerily prescient. On Thursday this week, I'm going to be working with a friend steam bending her kayak coaming so that we can finish up the skin-on-frame boats we're building. However, it appears that there are some other options.

Cold bending - a process that uses heat and compression to alter the structure of wood can provide a piece of wood that can be bent easily without requiring heat or chemicals to alter the wood. To use the product, the high moisture content treated wood is removed from its packaging and bent around a form to the shape that is desired. The material is then allowed to dry and will hold its shape. It was developed by a company called Compwood and seems to be offered by different vendors under different names. WoodenBoat Magazine had a review of the material in issue 213. 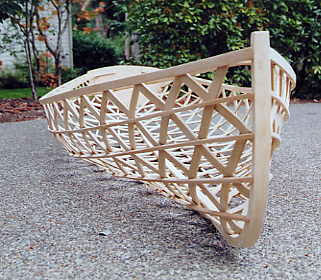 (Photo by Inventables)
While it looks like an interesting material, it appears to have a few shortcomings. The material is fairly expensive - a sample package of 5 - 1/2 board feet is $90.00 (US) - that's $16/board foot! The material is only available up to 100" long, can only be worked in limited ways and if it gets wet again, it may move again. The manufacturer claims that coatings will help prevent this, but if you're building a boat, it's likely that some of the coatings may come off from use or weathering.

Still, for certain applications, I'd love to try a few pieces!
Posted by Canoez at 9:09 PM No comments: