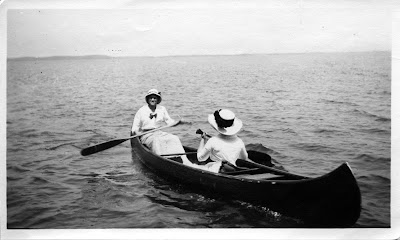 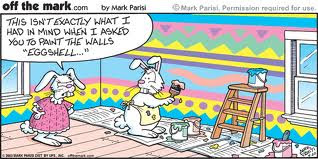 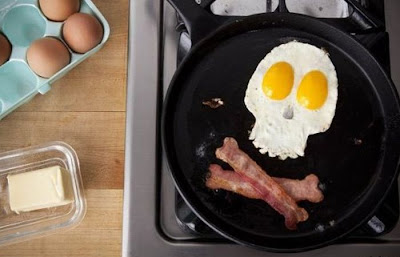 Ok, having a contractor who is a very good trim carpenter as a student can make for an interesting class. He sees things from a different point of view - which is good because it challenges some of our assumptions about how we do things and can allow some "higher order" methods to be tried. I know he reads this blog, so I'm hoping that he has a good sense of humor about this.

As we've discussed before (here and here...) , we make the canoe's bottom as symmetrical panels and cut the center-line of each panel to fit when the panels are off the hull. The major downside to this is that the panel "relaxes" when removed from the hull. One way to get around this is to mark the centerline and to make a several kerfs using a saw while each panel is still on the forms, keeping the teeth vertical. This gives you a series of guide marks to plane to. It works, but still takes a bit of skill and patience.

With guys like this student, it can be one of those, "life seldom separates the men from the toys" experiences. Witness the laser he chose to mark the center-line with: Makes a nice line - although it is almost a 1/16" wide (.062"). Meh. Quite frankly, it is much wider than I'm comfortable with as a mark. (Particularly when you consider the fact that our Japanese saw blades are only about .020" thick.) 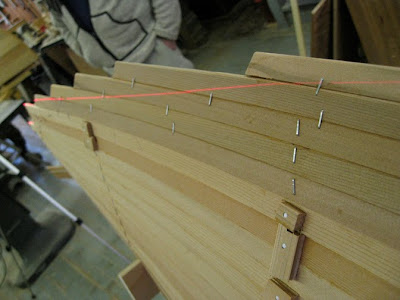 Here is where things went off track a bit. There were two engineers (who are also woodworkers) present with this student. The three of us started to posit how we could do this using a panel or circular saw to cut the centerline without removing the panel from the boat. The basic idea was to create a guide assembly for a saw that would be a consistent distance from the centerline and a consistent height at each form. This is the result of our discussion: 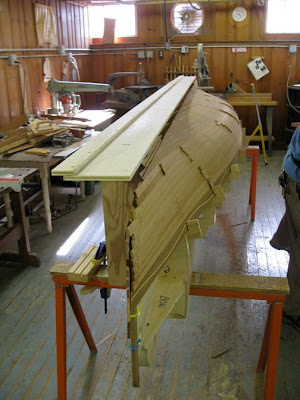 What you can't see is the vertical plywood elements that are screwed to the forms. These vertical elements support the plywood deck. There is a plywood fence screwed to the deck. It is set up so that the distance from the fence to the outer edge of the saw's blade is located at the center-line of the hull. As a test, the first cut was made a bit offset from the centerline (to the right in the image) as can be seen in the picture below: 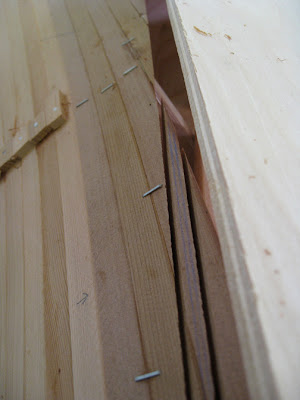 Once we established that a good cut could be made, the fence was moved over to the center-line and the final cut was made. We have yet to make and cut the second panel, so we'll have to see how things go. So far, the downsides are that the cut passes into the forms (i.e. we'll need to re-tape the forms before building the second panel), it takes a fair amount of time and skill to set-up and you need to be very careful at the ends not to cut into the stems

The verdict is still out, but so far it has been an interesting exercise. 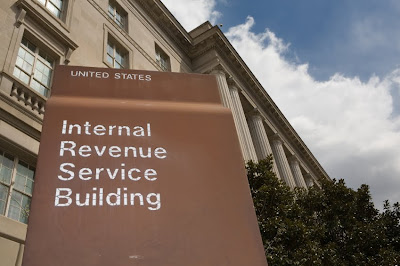 Need I really say more?
Posted by Canoez at 9:11 PM No comments: 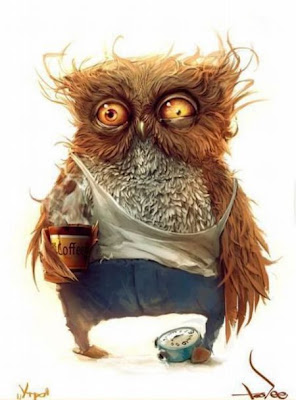 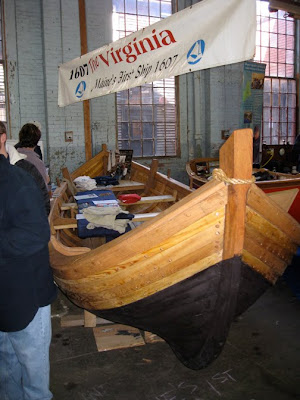 What is a Shallop?

In the 1600’s, the word “shallop” referred to an open wooden workboat such as a barge, dory or rowboat. Shallops were small enough to row but also had one or two sails. The shallop is a European-style boat of approximately 18 feet in length that can be outfitted to row or sail.

This was a traditionally built boat of cedar on oak that was fastened with copper roves and treated with "boat soup" and pine tar. (I must admit loving the smell of the boat.) This boat will serve as the tender for the reproduction of the Pinnace Virginia which was the first ship built by colonists at Maine's Popham Colony. 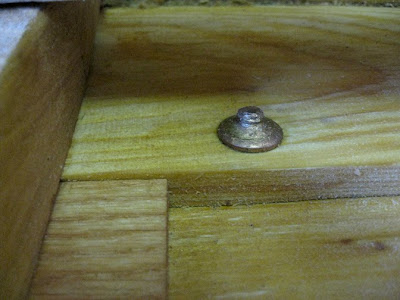 I like the boat for several reasons:
This boat was built by the 9th and 10th grade students at the Morse High School in Bath Maine. Quite frankly, they did a wonderful job, don't you think? 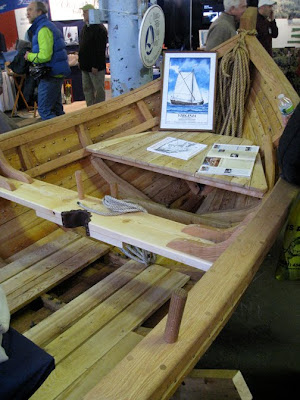 Posted by Canoez at 9:00 PM No comments: 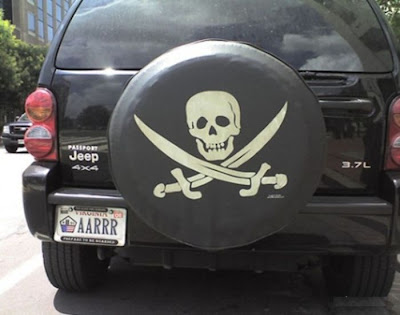 Henry 'Mac' McCarthy : Over the Bar

This is not the post I was planning to write tonight. Unfortunately the boat world has lost another pillar. In fact, this is a post I was hoping not to write for quite some time. Mac McCarthy has passed away at the age 0f 83. (That's Mac on the left in one of his creations.) As you can tell if you are a regular reader of my blog, I teach people to build Mac's designs - the Wee Lassie and Wee Lassie II found in his wonderful book, "Featherweight Boatbuilding". We've not tried his Big Mac yet, but I can see it being added to our repertoire one of these days.

All of these canoes are under 14 feet long - he was truly a big man in little boats. Little did I realize that his work and some of his perspective would become such a big influence on the way I think and work.

While my father and I had done some cedar and canvas repair and built a Ted Moores Redbird together, my first solo scratch build was one of Mac's Wee Lassies. Little did I know at the time where this would take me. I was asked to teach a class on the subject at a local school where I teach adults to build these little canoes. One of the first things I did was to drop him an email and ask if he'd be kind enough to offer me some suggestions on how to structure the class. To my great surprise, a very clear and thorough reply was waiting for me that day. He definitely didn't mess about.

When one of my students wanted to "stretch" a Wee Lassie, he had the advice I needed to make it work. When I was finally fortunate enough to get an invitation to teach the class that Mac taught at WoodenBoat, he had some good advice to help get me going in a teaching environment that was very different to the one I was used to. They were very big shoes to try to fill, and I hope that in his eyes, I did his work some justice there.

When at the school, I got some insights into Mac's personality from school director Rich Hillsinger that I didn't fully understand from the limited exchanges of email and phone calls I'd had with Mac. I knew that Mac had been in construction before starting to build canoes. What I didn't know was that he'd brought his work ethic from the construction business to canoe building - and the teaching of canoe building. Apparently in Mac's class, students not only built and trimmed out the canoes with hand-caned seats, many of them also built the paddle as well - in a two week class! That's a pretty aggressive schedule!

Mac also was involved with the WCHA and not only loved to build canoes and teach canoe building, but he truly loved to paddle them as well - particularly on quiet backwaters.

Sadly, Mac suffered from declining health in the past few years and had to give up his shop and go into a managed care facility. Even though he was unable to continue building the canoes he loved, he was able to give interviews and build model boats to occupy his busy mind.

I certainly think it would be fitting to hope that Mac is out there paddling on one of the crystal clear streams that he enjoyed near his Florida home.